Like some of Three Sister’s other products (including this one that I reviewed), Multigrain Berry does a great job at preserving the taste of a classic cereal (Post Frosted Shredded Wheat). For those who haven’t had this before, each bite is a bundle of shredded wheat with a sweet frosting coating. The rough, chewy texture is quite enjoyable and gives your jaw a workout. The addition of fruit flavoring adds a nice taste which is not present in Post’s basic shredded wheat.

Serving size is 1 cup  (55 grams) and there is about seven per package. In one serving there is 190 calories (only 10 from fat), 6 grams of fiber, 5 of protein, and 11g of sugars. These stats are all pretty much the same as Post’s version, which is not much a surprise considering the near-identical flavor. However, as this product is marketed as the “healthier” version of that, I wish they had at least a little less sugar, or more fiber/protein.

The ingredients are generally natural and safe, though its disappointing there is no real Blueberry or Pomengranate, rather some mysterious “natural flavor” to simulate their taste. I wish companies which claim to make healthy products would use fruit, not some substitute.

The ingredients here win out over many competitor’s products, which use either artificial flavor, artificial color, or BHT as a preservative.Post’s Frosted Mini Wheats “with a touch a fruit in the middle” is one such product that uses all three.

For those who don’t know what ‘Triticale” is, it’s a hybrid of wheat and rye which can give yield improvements and allow growing in different conditions. It also has more protein than wheat. It is well established as a feed grain, but its use in cereal is relatively new.

This cereal mostly lives up to its goal of making a healthier version of Frosted Mini Wheats. Fans of that type of cereal are highly recommended to try this. 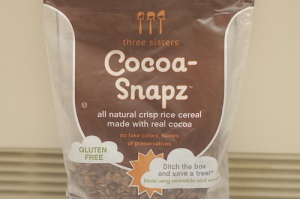 I like to eat cereal every morning with my family before I go to work. It’s a good way to start the day especially when I can’t always predict when I’ll have time for lunch. To keep things from getting boring, we try to change up the cereal every few days to something different.

I had reviewed Three Sister’s Honey Puffs rice cereal in a previous blog entry (see first reference below), and I decided to try out another of their cereals. As you’ll soon find out, these two cereals have a great deal in common.

This cereal is pretty much a “healthy” version of Kellogg’s Cocoa Krispies, meaning its supposed to be healthy though in some ways it isn’t much different.

This cereal is made of puffed rice, made with a similar process as puffed wheat in Honey Puffs. This gives it a light fluffy texture, and the added advantage of higher surface area without too much volume. In other words, you are eating a lot of air, and as a result you take in less calories, sugar, and nutrients (per spoonful) that you would otherwise if it wasn’t puffed. You could call this a health food in that sense (much like puffed rice cakes), but I actually think of it more as a way for the producer to save money on materials and sell a large bag of cereal with a good percentage of that empty space.

It has a moderately sweet chocolate flavor, which is appetizing but not quite what I am looking for in a cereal. The sweetness catches your intention while you are eating but sometime later you realize you really haven’t eaten that much food (at least if you eat a small bowl like I do) and are likely to get hungry earlier than if you ate a more wholesome breakfast.

Both the flavor and texture is nearly identical to Cocoa Krispies.

There isn’t much nutrition in this product, with no fiber, practically no protein (1 gram per serving), and less than 10% of most common vitamins and minerals. Sodium is nothing special at 150 mg, which is 6% of daily intake.

Because of the lack of substance and nutrition, I feel this is really not the best way to get your day started, unless of course you supplement it with other foods higher in nutrition.

The ingredients are so-so, with caramel color, and natural flavor as negative marks in my book. The full list is as follows:

When comparing this to Cocoa Krispies, as you might expect both the ingredients and nutritional information is very similar. Calorie count is virtually the same (120 calories for one 31 gram serving) and sugars is actually a tad less in the “less healthy” version, at 12 grams. The other funny thing is that Cocoa Krispies has much more vitamins and minerals (compare 25% DV of vitamin A and C to 0% in Cocoa Snaps).

I remember writing something similar for the Sugar Puffs review – but I’ll repeat it here. If a cereal really wants to be billed as “healthy”, it should reduce sugar and add some more nutrients. This cereal actually has less nutrients and more sugar! (I’d like to point on here that some believe that vitamins and minerals added artificially are not easily absorbed by the body and have little to no value)

There are a few areas where Cocoa Snapz is healthier than its predecessor. Natural flavor and caramel color is used instead of malt flavor, artificial flavor, and BHT (a preservative). The last of those has particularly scary, with some research pointing to cancer-inducing effects in animal experiments. I’m not convinced it is truly harmful but if a cereal can stay fresh enough without BHT that is clearly a better way go.

Available exclusively from Whole Foods. I purchased mine for $3.99. There are 396 grams in the package.

A cereal that closely copies Cocoa Krispies flavor while making it more healthy in some areas (no preservatives) and potentially worse in others (less nutrients, slightly more sugar). If you are a fan of Krispies I recommend trying this, otherwise I would search for a heartier cereal with more nutrition.

I live a conflicted life – I yearn for sweet treats while simultaneously scrutinizing them for sugar content. Sugar is also the topic of this blog, albeit indirectly.

As I studied my sugar intake I began to realize there is enormous amounts of it in some unexpected places, especially in breakfast foods. Everyone knows donuts are quite sugary, but when you turn a careful eye to other foods such as yogurts, and even many cereals, the sugar really comes out of the woodwork.

Our product this time is in that very category, a strongly sweetened breakfast cereal made by Three Sisters company (not to be confused with “Three Twins”, the ice cream producer). A great thing about this company is that they purchase wind-generated credits proportional to the electricity used to make their cereals, a nice aid to sustainable energy.

This cereal is made of sweetened wheat grains, puffed with heat in a process much like popcorn. Both flavor and composition is very similar to Post’s Super Golden Crisp, which it’s clearly modeled after.

I think you probably already saw this coming, but the sweetness is a little too heavy for my taste, especially when eating this as my first meal of the day. The puffy texture is pleasant, but it seems a tad airier than Post’s classic cereal, at least as far as I can remember.

If the overt sweetness doesn’t bother you, you will likely find this cereal quite delicious. My young son loves this and eats it up, sometimes asking for seconds.

One serving (27 grams or ¾ cup) contains only 110 calories, a typical value for cereals. Unfortunately sugar clocks in at a whopping 15 grams. Sure, if you only have one serving this isn’t a massive amount, but the amount of sugar per weight is very high, surpassing many ice creams!

With minor amounts of minerals, this product is nutritionally unimpressive, with only 2 grams of protein and zero fiber. There is low salt (65 mg), and no fat or cholesterol, but that doesn’t make up for the lack of  nutrition.

Ingredient composition isn’t anything special either. Here is the full list:

Three out of four of the top ingredients are used for sweetness. With a name like “Honey Puffs” you would expect honey to be the most prevalent, but instead its disappointingly last, and thereby in a much lower proportion that the other sweeteners. Corn Syrup, while not nearly as bad as its evil brother High Fructose Corn Syrup, is nevertheless made from processed corn and something I think we all have had too much of in our diets.

Caramel Color is another undesirable item which I discussed in one of my recent posts. Effects on the body vary depending on the process used but coloring is never a plus unless its from something completely natural.

Sodium Acetate is a common flavoring agent (it gives the characteristic taste to salt and vinegar chips), which supposedly has no major health drawbacks. Having said that, I prefer they would use something a bit more natural, like plain old salt.

Above all my biggest problem with this cereal is that it isn’t much different than the classic cereal it is clearly based off, Post’s Super Golden Crisp. Ingredients are very similar, though there are some minor tradeoffs like less salt (40 mg) and non-zero fat (.5 g). To make matters worse, Honey Puffs actually has *more* sugar than Super Golden Crisp. Give me a break!

I think making a healthy version of a not-so-healthy classic is a great idea, but I wish they would set themselves apart by a wider margin.

Available exclusively from Whole Foods. I purchased mine for $3.99, though recently they had a sale for buy one get one free.

Cereal with too much sugar and not enough nutrients to make a well-balanced breakfast.

I recommend the Honey Oaties cereal from the same company, which contains more fiber and much less sugar.