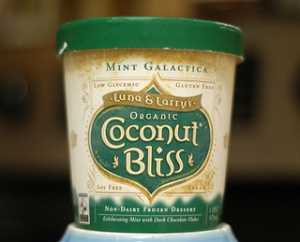 This is my second product report of a Luna & Larry’s Coconut Bliss product, the first being of Chocolate Walnut Brownie flavor. I’m a big fan of that ice cream so I thought I would experiment with another flavor.

I’ve had my share of mint ice creams: Bryer’s mint chocolate chip was one of my favorites as a boy, and recently I’ve enjoyed Talenti’s Mediterranean Mint on a handful of occasions.

I was won over by this product’s great name (could it be because I’m a fan of Science Fiction?), even before I tossed the pint into my shopping cart. If I gave a rating for naming, I would surely give this a 10/10.

The base cream has a strong coconut flavor, more so than other makers’ coconut ice cream I’ve tasted, and the mint is very much in-your-face. These two flavors mesh well and make a great foundation for an excellent taste experience.

But this ice cream falls short to deliver a strong counterpoint which serves as a contrast, like a picture with a well defined foreground and background. In my previous review, there was a nice contrast between the sweet chocolate coating and the (somewhat) crunchy cookie part.

The chocolate flakes are supposed to serve that role, but until I ate this I didn’t realize the true difference between ‘flakes’ and ‘chips’. Chips are cube shaped and flakes are, well, similar to well-known corn flakes where they have a large, irregular surface area, but are extremely thin. My problem with this shape is that they appear large and tasty, but when you taste them there is practically no substance. As a result they don’t influence texture or taste much. I included a close-up picture of the flakes at the bottom of this post for reference.

After several servings of this I might get used to these flakes and understand their contribution better, but at present I just feel like there this product is just too hollow and lacking depth.

Another minor disappointment is that this ice cream is white, not colored green like some other mint-flavored creams. Of course I’m against using artificial colorings, but apart from that I feel the color has a psychological effect of emphasizing the mint flavor and making it taste all the more refreshing. To me, plain white signifies vanilla, which is at odds with the actual flavor here.

Don’t get me wrong – I’m not trying to say this coconut ice cream is that bad, its just that when compared to  similar products it falls short. In fact, I am enjoying eating it while writing this report.

A 1/2 cup serving (97 grams) contains 15 grams of sugar, below average for ice creams, and 240 calories which also on the low side. There are 3 grams of fiber and 2 of protein.

Nutritionally this ice cream is very similar to the previously reviewed Chocolate Walnut Brownie, except that here we have much less Iron (4% vs 15% DV), one-fifth the salt (10mg vs 55mg), and a few other minor differences.

The base ingredients are also similar between these two products, and everything is organic. Of course there are no brownies or walnuts, which have been replaced by peppermint extract and coconut cream, the latter being an ingredient I haven’t seen used before. The chocolate here is in flake form as opposed to be mixed into the cream itself.

I have been researching the health effects on various types of sugar, and apparently some professionals believe that agave isn’t especially good for the body. The high amount of fructose contained in agave makes it resemble the dreaded “high-fructose corn syrup”. I plan on doing some more research on this critical topic and eventually would like to write a detailed post with my results, but for now I’ll just say that there is disagreement on how healthy each type of sugar really is. I personally still prefer agave to standard sugar, but because of the uncertainty I’ve reduced my ingredients/nutrition rating of this product from 8.5 to 8.0.

This typically sells for around $6.49 with tax. This a bit pricey for those on a budget, but not unexpected, considering this is a non-dairy specialty product.

There a only a few places that I know of in South Florida that sell this, one is Whole Foods Market which is where it happened to be on sale for roughly one dollar cheaper.

Nice healthy ice cream with natural ingredients, but the flavor may be a little underwhelming for those who are used to other mint creams. 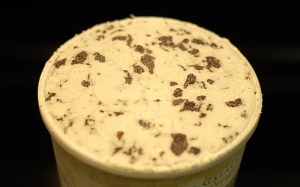 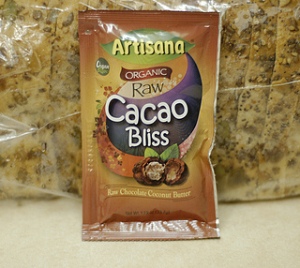 A majority of the products I’ve reviewed in this blog up until now have been longtime favorites of mine, something I’ve enjoyed for months if not years. Those reports were a lot of fun to write, but I’m running out of ammo. If I am going to keep updating this blog at the same rate, I’m going to have to adventure out and try new things. It will be a great experience for me to see what else is out there in the world of sweets, and I hope some of you readers can learn about some products you hadn’t heard of it, or hadn’t had a chance to try.

My last review was partially in this category, but the subject this time, Artisana Oganic Raw Cacao Bliss, was chosen just so I could have something interesting to report on.

I wasn’t able to find out the official date this product was released, but I just noticed it on the shelves of Whole Foods Market a few weeks back, so it may be somewhat new.

I could just state the flavor is a mix of coconut and cacao, which would be quite correct, but that much you could easily guess just from the product name.

In all fairness, I come a background of heavy “Justin” (Justin’s Chocolate Hazelnut Butter) use, so I can’t help but compare initially. Texture wise, cacao bliss is much more oilier with a finer consistency, almost what I would describe as grainy. Due to the lack of nuts this product is less ‘meaty’ than nut-based spreads.

What really hit me in the face, so to speak, was how *coconutty* this spread is. I’m a big proponent of coconut-based ice cream, but I’ve never been overpowered by the coconut flavor there; it’s always secondary to the other flavors. In this product it’s really exposed, with the cocoa flavor taking a back seat.

My first reaction wasn’t too rosy, but after I finished my slice of bread and rested a moment, I realized I wanted some more. So I worked my fingers and squeezed every last drop of this coconut-heavy spread into my mouth, and to my surprise was already liking it more. I have the feeling I’ll learn to love it as I eat more of this product, and learn to stop comparing it to other spreads.

In one 33.7 gram pack there are 177 calories, a value on par with similar spreads. Sugar is very low at 3 grams, nearly half that of my beloved “Justin”.

There all only five ingredients, all Organic: Coconut Butter, Extra Virgin Coconut Oil, Agave Syrup, Cacao, and Cacao Butter. Many will be happy to hear this product is both vegan and free of sugar cane sugar, and it should satisfy even the pickiest health fanatics. I’d like to note that the term “raw” is a bit vague, and most if not all of the ingredients here have at least some processing.

Although the protein content (2 grams) is a little lower than nut-based spreads, both coconut butter and coconut oil are known for a wide array of health benefits.  For example, they can increase metabolism, reduce cholesterol, and help maintain proper weight.

Unfortunately in the world of nutrition there is always another side to things. Coconut oil is a saturated fat and hence should be limited a small portion of total calories due to potential increase in heart disease risk. So as with most things, eat this in moderation.

Healthy chocolate spread which is great for coconut lovers.