This is the last review of a product I purchased in New York on a recent business trip there. I’ve reviewed one of the Royce stores, and also a green-tea flavored white chocolate of theirs.

The reason I bought this is because I felt like trying their dark chocolate, and many of their other products were much more expensive. This has only 63% cocoa content, but their products with higher percentage were either not in bar form or required refrigeration which was a no-go for a traveller like me.

The product name “Black” is actually not listed in English on the front of the package, though the black font does convey this image. It is listed at the bottom in Japanese (ブラック /  burak-ku).

The descriptive text for this product on their website says “Authentic dark chocolate with a superb balance of bitter”.

The chocolate bar is contained in a airtight, plastic bag inside of the external wrapper. Many other chocolatiers make similar efforts, but this is the best job I’ve seen in terms of keeping the chocolate in perfect shape right up until you take your first bite.

The little square nuggets this chocolate is segmented into (32 total) are a little thicker than I usually prefer, but I quickly got over this minor issue as I placed one gently into my mouth. Just like the marketing material, the bitterness of cocoa was balanced with a succulent chocolaty sweetness that was out of this world.

I usually eat higher concentration chocolate so this tasted extra sweet to me, but in my memory of eating bars in the 60-70% range this was the best tasting. Having said that, I hope to review another chocolate bar in the near future with the same cocoa content and see how it stacks up in a side-by-side taste test.

There isn’t much else to say about this bar – there isn’t any special texture or add-ins. But for semi-sweet chocolate lovers there is little to complain about and lots to love!

The 63% of cocoa in this product is really at the low end of what is considered “dark” (60-70% is the typical minimum). As a lover of chocolate in the range 75-90%, I wish they would put out a bar with higher concentration. However, as I mentioned in another of my reviews on Lindt chocolates, the strong bitterness of hardcore dark chocolate is an acquired taste, so it makes sense for producers to pick a mixture that everyone can enjoy.

There is 11 grams of sugar per serving, typical for semi-sweet chocolate.  There is also 2 grams of protein, and 2 of fiber.

Containing two of ingredients I dislike for health reasons, “natural flavor” and “artificial flavor”, I can’t recommend this to anyone who is picky about whats in the food you eat. But for those who don’t care (or those that do but can make an exception time to time), the extra flavor resulting from these mysterious ingredients is well worth it.

This sells for $7.99 and is only available by going directly to the Royce stores in New York, which were recently established in 2012.

Doing a quick price comparison against Lindt’s 50% bar, we see the price for Royce “Dark” is about 1.5 times higher. I feel the price is worth it for a rare, imported product.

Though a little pricy, this refined chocolate imported from Japan packs a savory taste that’s top class. Just be aware that the ingredients contained are not fully disclosed and are certainly not natural. 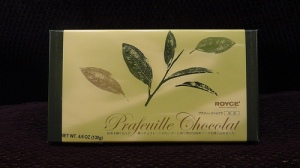 This is the first of two products I will be reviewing from the Japanese chocolatier Royce, whose store I discussed here.

I purchased this because its’ one of the few products sold in the US which is flavored with real green tea powder.

Each of the 30 chocolate wafers is individually wrapped and stacked in 6 bins. I’ve noticed this type of packaging is pretty common in Japanese candies, and has the advantages of maintaining freshness and cleanliness, in addition to adding to the ‘gourmet chocolate’ feeling. On the other hand, it contributes to extra waste and adds time to the process of eating each one.

Opening one of these little packs reveals a light green candy in the shape of a perfect square. It’s slightly larger than a quarter and has  name ‘Royce’ printed across several times diagonally. It’s also extremely thin, surely the thinnest chocolate I have seen in my life, roughly three or four times  shorter than your average chocolate bar.

Inside each thin wafer there is an even smaller portion of “maccha sauce” (translated directly from the Japanese text inside the package), which is basically like a maccha-flavored jelly with an extra touch of sweetness. The practically microscopic size of this jelly makes it difficult to appreciate, however.

In one serving (7 pieces / 30 grams), there is 180 calories, half from fat, and 11 grams of sugars. This amount of sugar roughly corresponds to a chocolate with 60% cocoa.

This product is essentially a white chocolate, and therefore does not contain cocoa solids, only cocoa butter. Unfortunately this means it also lacks many of the antioxidant properties of dark or semi-sweet chocolate.

The ingredients are fairly commonplace, and not particularly unhealthy, except for “artificial flavor” which is even worse than my pet peeve “natural flavor”. I generally try to avoid any artificial flavors, which are basically chemicals cooked up in a lab which try to simulate the taste of real, organic substances. The composition of these compounds could technically be the same as their organic counterparts, however they were created via some form of chemistry magic, so cannot be considered “natural”.

While Royce does a good job putting out a high class chocolate image, its clear they are not catering to the health-seeking crowd, with artificial flavorings and no other special qualifications (organic,vegan, etc.).

In America, this is only officially available via one of their two (soon to be three) New York stores, where it sells for $18. You may be able to find third parties importing it from Japan, but there is usually a very high mark-up, on the order of 200%-300%.

Royce has put great effort into the appearance and packaging of this product, but the taste itself is basically white chocolate with some green tea powder added in. Artificial flavors, plus a high price, makes it hard to recommend it for most people except green tea fans who are more likely to appreciate the flavor.

One thing I have become slightly disappointed lately is the state of the various chocolate producers and their product lineups. While there are a few companies, such as Green & Blacks, which make a variety of creative, tasty chocolate products, there are countless other companies that put up a big marketing show for run-of-the-mill chocolate without any special characteristics (flavor, ingredients, etc.) . I don’t know how some of these companies can stay in business with so many competitors putting out nearly identical products. My guess is that most of it comes down to marketing and connections, and as long as a company can hook a niche market they can survive for some time.

Near the end of a recent business trip, I happened to be browsing through New York’s Bryant Park, searching for food and sweets in the many stores in the park and in the nearby area. I walked by one store and as I peered in through its window some very unique chocolate caught my eye. Not just the stylistic packaging, thin square boxes with monotone coloring, but the chocolates themselves were something I had never seen before. There was a dark-chocolate looking one covered with powdered cocoa, and a green one covered with something that looked like green tea powder. Unfortunately the store was closed at the time (it was sometime after 8pm on a weekday), but I decided I would research this place and come back later. The name “Royce” was easy to remember if I associated it with “Rolls Royce”.

When I got back to my hotel and did a bit of research I discovered Royce was a high quality Japanese chocolate maker, established in Sapporo in 1983. Their Japanese name is pronounced something like “royz”. That explained the green tea chocolate – the Japanese really love their green tea. The company’s website said there was only stores available in the US, and both were in New York. Lucky me! I decided to head there the next day, which was my last opportunity to shop before returning home.

Getting there was a bit tricky since I got off at work at 6pm and they closed at 7. I ended up taking the Metro and having to run through the city until I arrived around 6:30pm with just enough time to browse.

The store is set inside a building with others, such that a double entrance is required to get inside. The actual square footage of the place was very small, but with a sparse design they somehow managed to make it feel much bigger. There was a large shelf against one wall with various products on display, and a long square table in the middle. Everything was very modern, very bright, and very clean. Essentially, very Japanese. If you check out this link, you can see their other store to get a feel for the design used. (Interesting linguistic note: one word for ‘beautiful’ in Japanese is ‘kirei’ which also means ‘clean’)

Upon closer inspection, the middle table contained both products I had seen in the window, “Nama Chocolate Bitter” and “Nama Chocolate Maccha”. Both were only $18 which I considered cheap for these rare and unique products. I felt even better about this price after I heard from one of the saleswomen that they do not sell their products online. (Note: I did find at least two of their products sold on Amazon, but they were by third parties and had very high markups of over 200%. Here is one.)

After taking in the beauty of the store for some time, I become concerned when I realized the middle table was actually refrigerated, and when I asked one of the saleswomen she said the products will last 7 hours outside a refrigerator, and 11 hours inside a special bag which they provide free of charge. Unfortunately my hotel didn’t have a refrigerator, so these wouldn’t do for a souvenir to bring home to the family. It would be a waste of money to buy and eat only a few myself before throwing it away, so I decided on skipping these altogether. I was given a small sample of the bitter one which had an amazing flavor, something like light fudge with cocoa powder. A second sample which I couldn’t refuse was one of their marshmallow products. It was surprisingly tough but had a taste like nothing I’ve had before.

In retrospect I feel a bit stupid, because although the products displayed in the window were not in a refrigerator, the product name “nama” means “raw” in Japanese, so I could have of guessed refrigeration was required.

I ended up purchasing two other products which didn’t require refrigeration. I haven’t tried these yet but planning on tasting and reviewing soon.

A very unique chocolatier only available in New York – highly recommended for anyone who considers themselves a consumer of high quality, high class chocolates.

Note: They are working on opening a third store, and one of the other stores was closed for construction, so be sure to check their website before heading over.